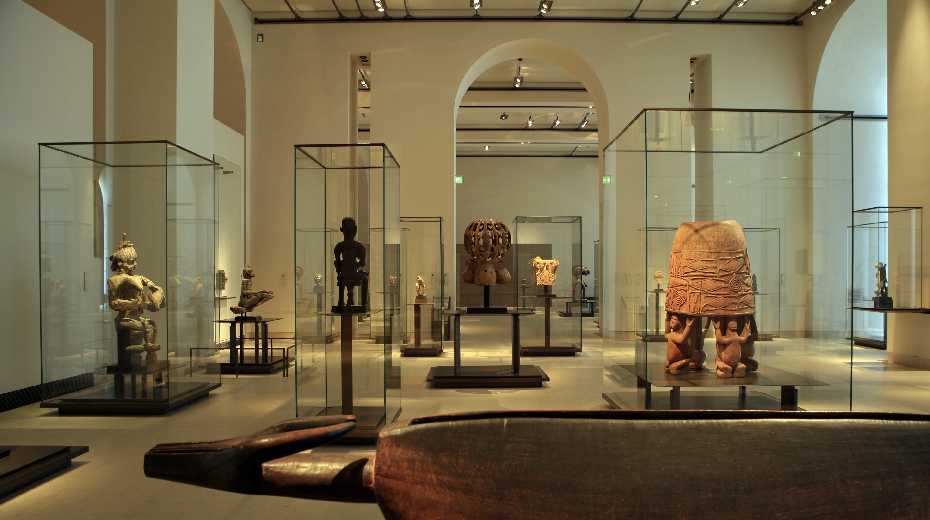 Chairs with duho backs belonged to chiefs and shamans. They sat on these chairs to enter the ecstatic trances provoked by consuming hallucinogenic substances. In the 16th century, after the arrival of the Europeans in the Greater Antilles, the Taino culture disappeared within 20 years.

Among the Fon, Gou was the god of war and metal. This sculpture is attributed to Akati Ekplekendo, who produced it before 1858, in the early years of the reign of king Glele. The statue was exhibited at the musée d'Ethnographie du Trocadéro after the Palace of Abomey was taken by French troops in 1894.

Incarnations of gods or goddesses in a stripped down form, Nukuroro sculptures were preserved in temples or clan houses. To thank them for the fertility of the lands, the sea and humans, they received offerings such as the first fruit of the harvest or personal ornamentation.

A simple mechanical device enables the sides to be opened and closed. The mask can appear to be a raven or reveal a human face. It would stimulate the surprise and wonder of the audience gathered for the great winter ceremonies marked by the presence of the spirits of the ancestors among the living.

An object of prestige, this spoon was used to take food from the common serving dish. Each guest would serve themselves with their own spoon, in hierarchical order, during collective meals which were also a means of paying homage to the ancestors.

The uli statues were used during rituals honoring the dead. With a beard, marked musculature and other signs of virility, this sculpture was an idealised representation of the powerful and aggressive chief. The prominent female chest evokes the capacity of this strong man to feed his people.

Known as adu, "ancestral spirit", this statuette served as a receptacle for the soul of the dead person, and was used for offerings. It brought prosperity and health. The figure is stylised although its hair and jewelry are very detailed. The sculpture is also very well-known because it was photographed by Man Ray.

Considered as one of the most beautiful examples of drums in African woods, this instrument depicts a stylised bovine figure; a sign of wealth or chiefly authority. It was used to announce war or hunting, to announce the holding of councils, festivals and other events.

Figure of the god Kuka'ilimoku

We must imagine this basketwork structure covered in small red, yellow and black feathers. It is a representation of a god of war. The sculpture, composed of rare materials, is technically very difficult to execute. It may have been collected during the third voyage of James Cook to Hawaii in 1778-1779.

This rare female statuette was probably related to initiation or funerary rites associated with fertility and with the annual cycle of death and rebirth. The Chupícuaro culture is located close to a village containing ancient cemeteries but which are now completely covered by the waters of a dam.