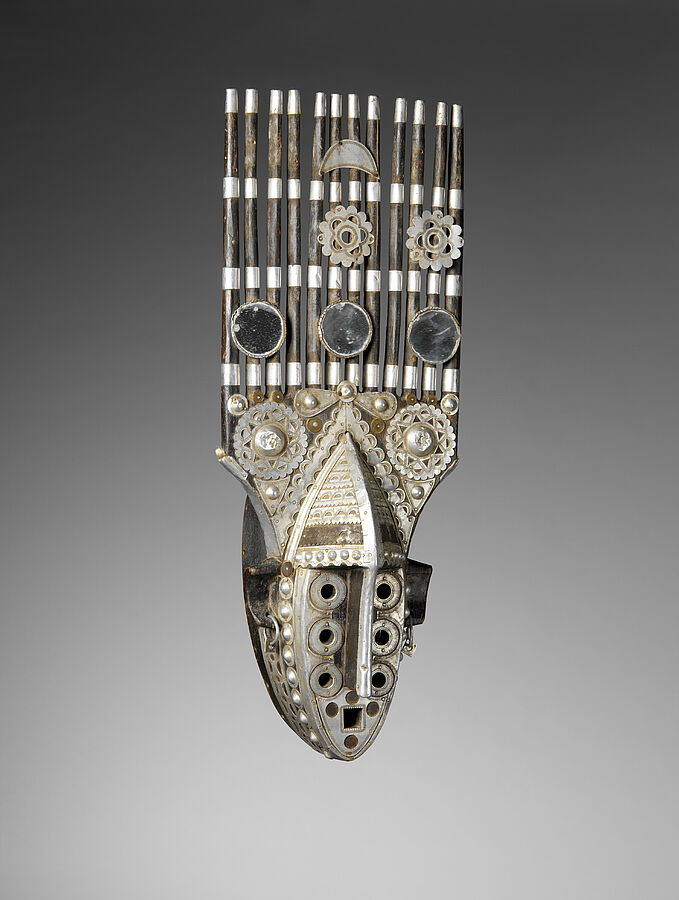 This face mask covered with aluminum plates and circular mirrors is used in the context of initiation ceremonies among the Malinke in Guinea. The ornamental use of metal reflects influences from the decorative motifs of Islamic art. 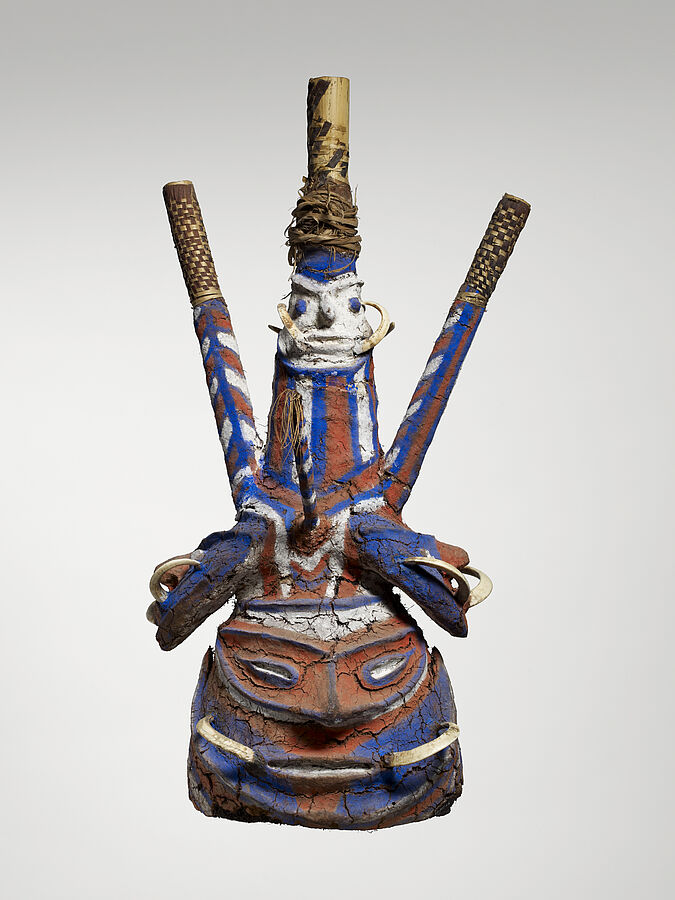 This dance headdress is made from the trunk of a tree fern, covered in fibers and painted with pigments of European origin in red, white and blue. The base of the helmet is formed of two figures in relief, positioned back-to-back. These figures are each decorated with a pair of boar’s tusks, which are the traditional currency of Vanuatu. It was worn during men’s grading ceremonies which enable a man to advance his prestige and power. 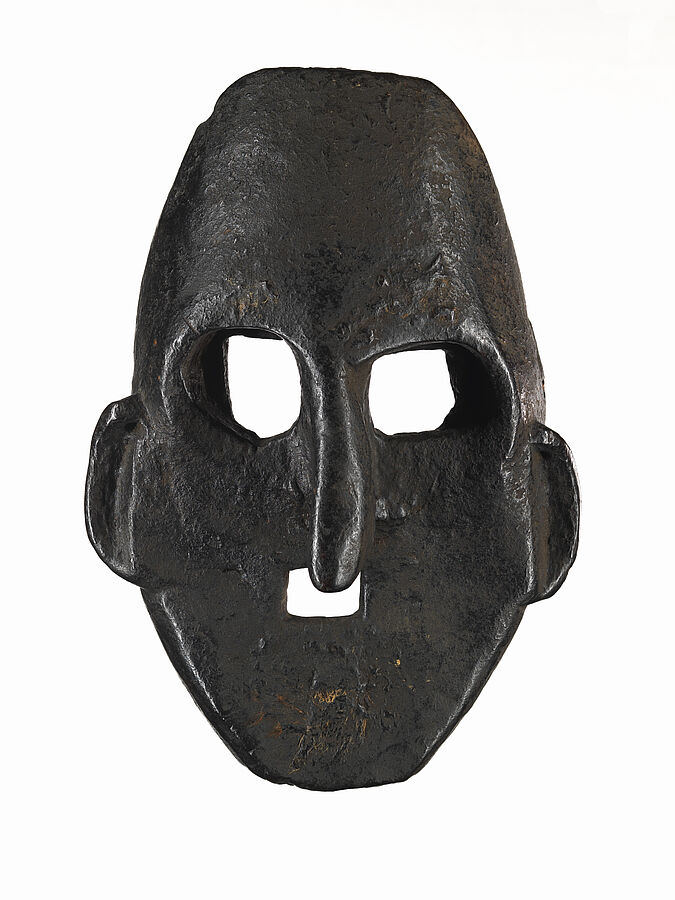 The use and form of these masks remain enigmatic. They are attributed to non-Buddhist societies from the hills of Nepal (Tamang, Raï or Gurung), which fell into disuse at the end of the 19th century. They could be the faces of ancestors, demons or theatrical personalities. 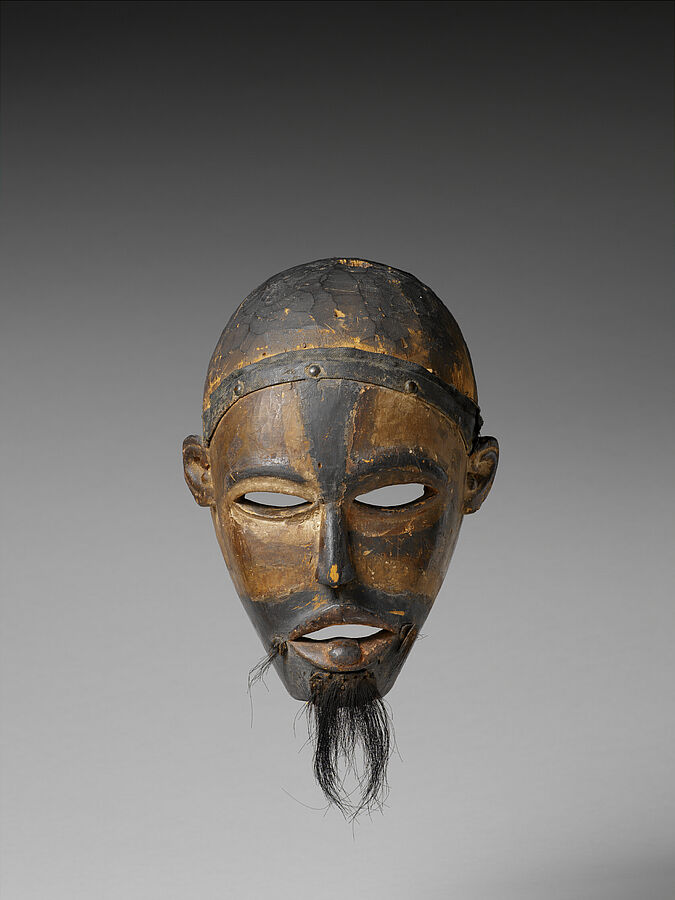 In Central Africa and in particular for the Kongo groups, the role of the diviner, the Nganga, is crucial for the life of the village. When he officiates, he wears a mask in order not to call attention to his status of a human when he enters into contact with invisible worlds. 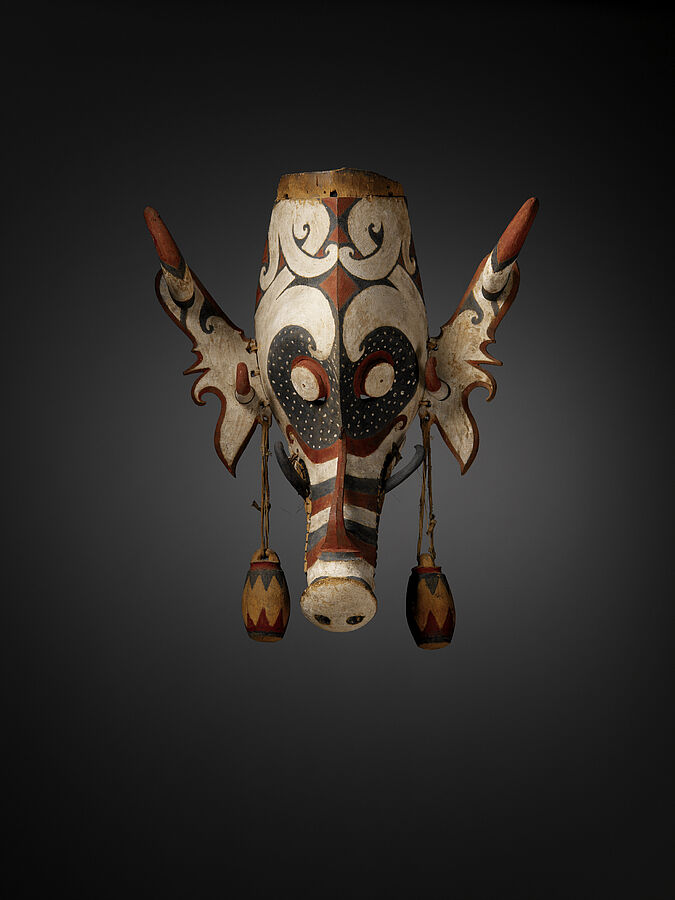 These masks represent bush spirits who were called upon to purify the village. The masked dance of the Hudoq takes place when the granaries are full. "It is considered by the villagers to be a fertility rite for the earth and for all of nature. The masks played an ambivalent role: they acted as scarecrows to frighten away evil spirits and as magnets for good spirits which they ultimately incarnated,” according to Nicole Revel. They reflect wild creatures and they include in their complex forms wild boar tusks, hornbill beaks or carnivore teeth. The bearers of these masks wore voluminous mantles of banana leaves. 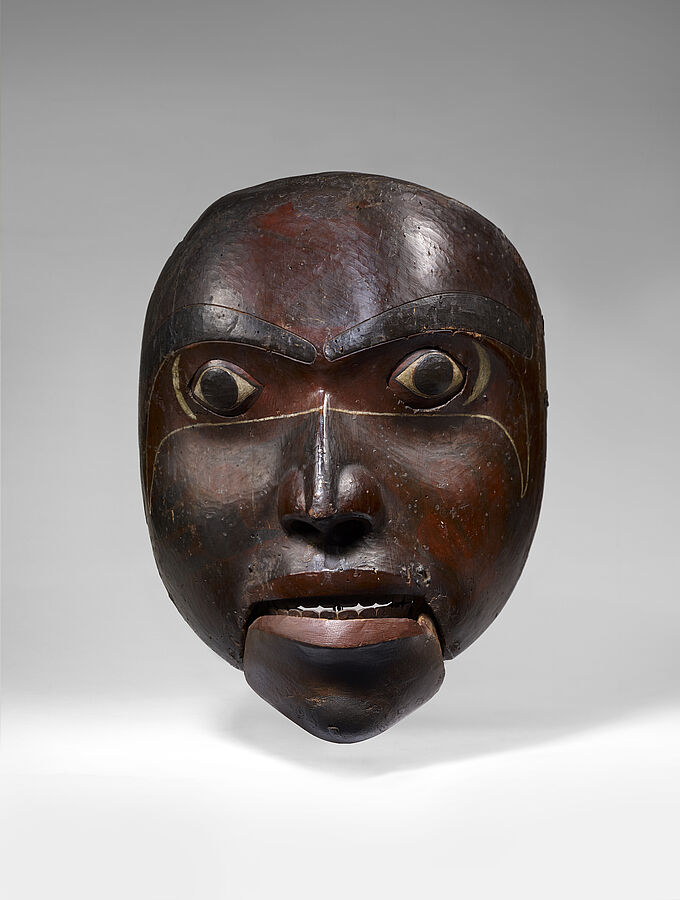 The jointed masks of the Haida people portray an ancestor or a mythical hero whose exploits are retold during theatrical performances. The mouth and eyes are jointed and the movement of the eyelids, painted in white, suggests the alternation of day and night.

Jointed mask of the Haida people, Canada, British Columbia, 19th century, made of cedar wood and fibers, painted in green, red, black and white, with metal pins, formerly in the André Breton collection, donated by Aube Breton-Elléouët and Oona Elléouët, 7 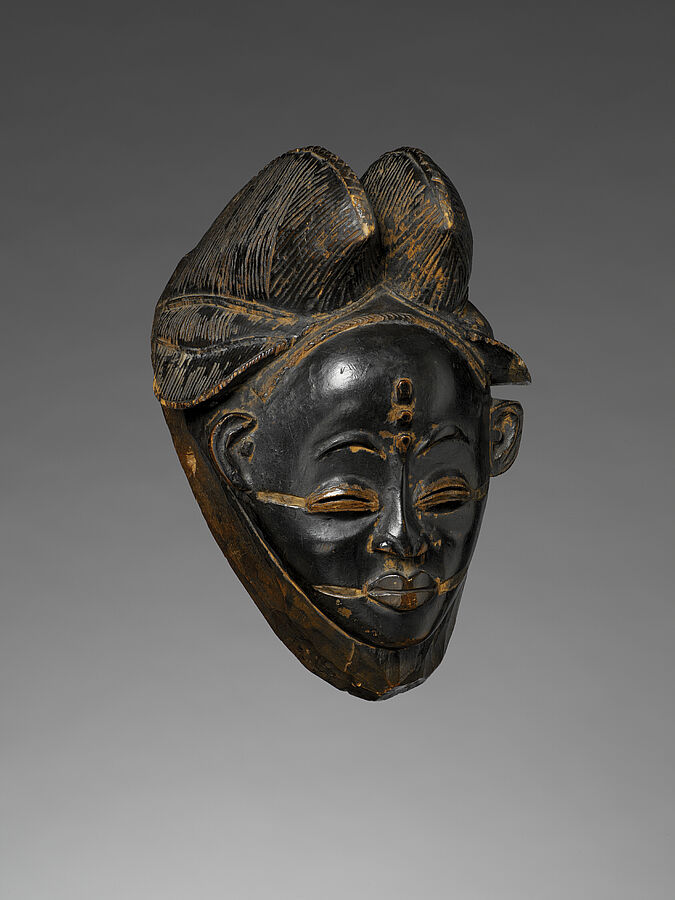 The ikwara mask of the Punu people of Gabon appears when justice must be done. This is a violent mask that is feared and comes to restore order after a serious event has struck the community. 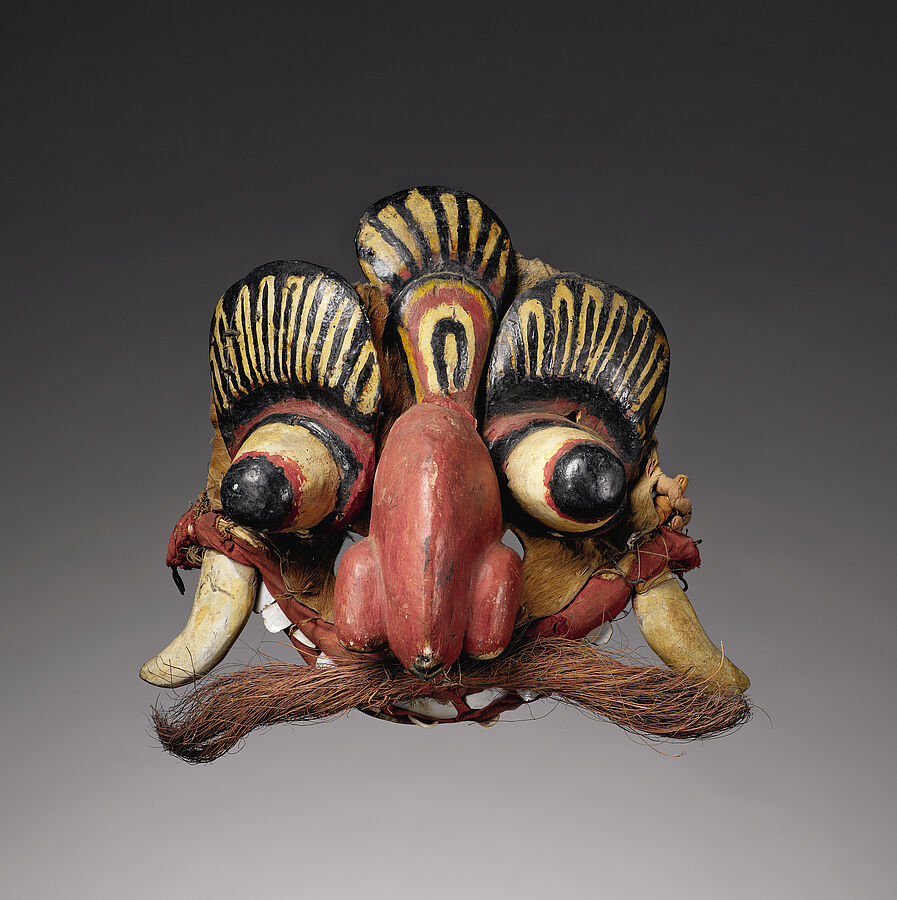 These masks with a fierce expression and caricatural features represent the demons responsible for diseases. They are worn during theatrical therapeutic rituals. The faces are humorous reminders of different health problems: headache, toothache, etc. 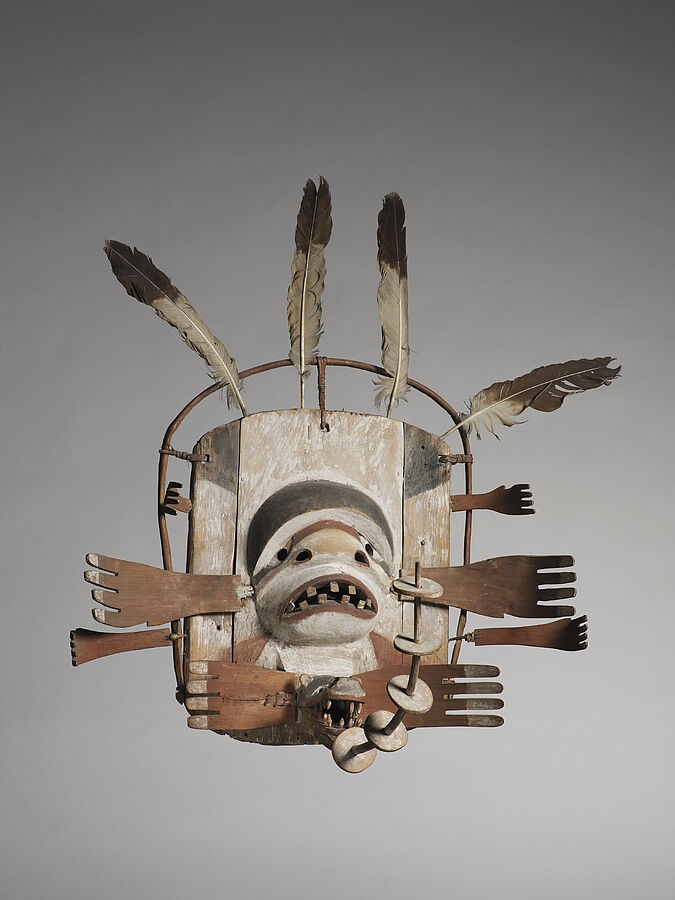 Mask of "the Spirit of the Moon" worn by the angalkuq (shaman) during ceremonies for successful hunting. On the face of the mask, the spirit of the Moon and that of a dog or a wolf are also represented. The disks portray the air bubbles of the seal as it emerges from the surface of the water. 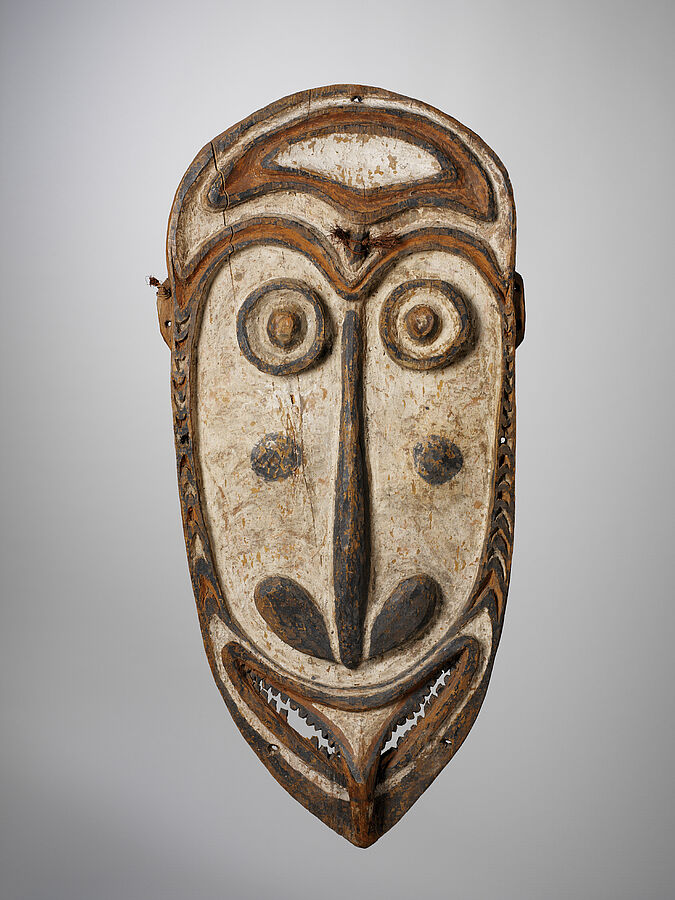 This type of mask was placed on the façades of the men’s houses under a thatched overhang. It plays the role de guardian and represents an ancestor spirit of the clan that owns the house. 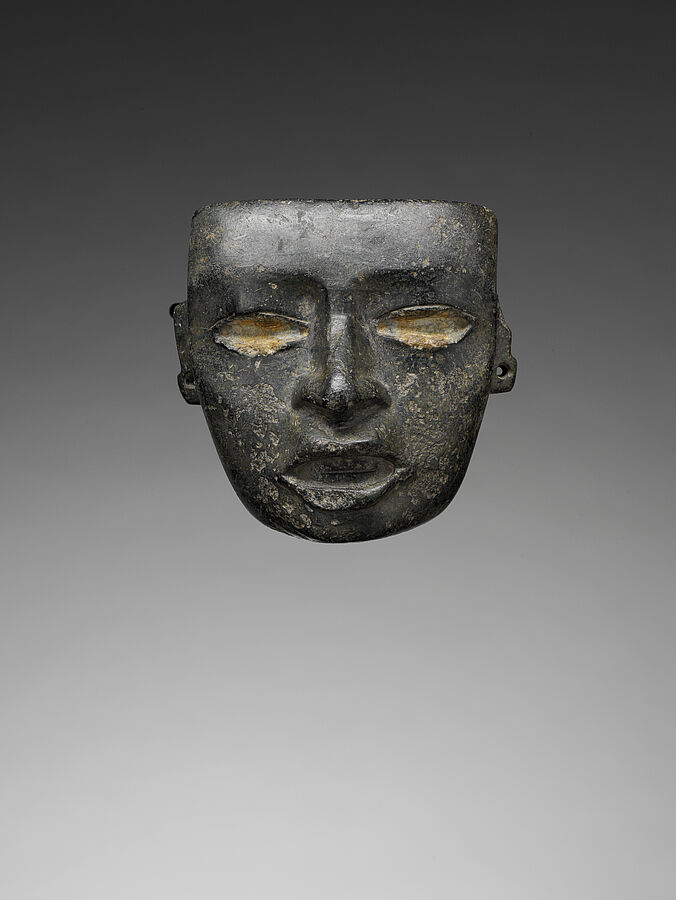 Masks of stone have been found around the sites of palaces of the Teotihuacan civilization. They are all the more exceptional due to the fact that only very rare anthropomorphic representations remain of this culture. These masks were probably the faces of statues that were dressed and made with bodies of perishable materials that have today disappeared. 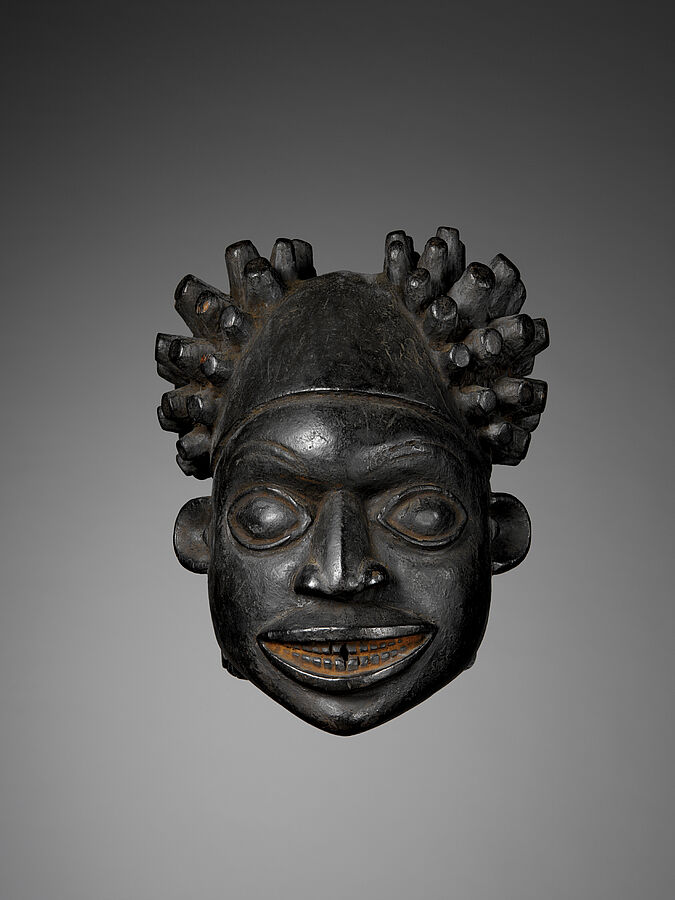 This mask was worn like a helmet, on the top of the head. It represents a dignitary wearing a knitted cap covered with small tubes of knotted thread. It was brought out to maintain public order.